Every game you go to, in every sport, you hear it. Coaches, parents, and often times players, complaining about the refs. The ref cost us the game. The ref is a homer. The ref just outright sucks. Well, don’t worry, Stripes. I’ve got your back.

Why would I defend the most universally hated people on the sports planet (well, next to this guy)? Not because it’s really just a bunch of whining, which it is, and excuse making, which it is, but because it does a disservice to the coaches, the players, and the refs. That’s right. Here’s why you need to get off big Blue’s back. 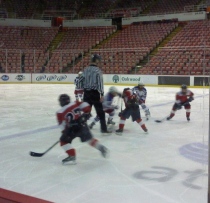 END_OF_DOCUMENT_TOKEN_TO_BE_REPLACED

Keeping kids safe and social services off your back

A ruptured patella tendon. A dislocated shoulder. A broken hand. A broken arm. A bone bruise. Another bone bruise. Torn calf muscle. Strained ulnar nerve. Various bumps, bruises, welts, cuts and scrapes. Those are just some of the ways we’ve managed to hurt ourselves playing sports. At one point, the admitting attendant at the Urgent Care knew my name and that is not a good thing. Especially when they start asking your kids those questions.

If your kids play sports, it’s inevitable that you’ll suffer an injury or two. That’s why we carry the cold packs, Advil and extra large band aids. And why I wish I had bought an x-ray machine about 10 years ago. But, there are some ways you can reduce or prevent injuries and keep Child Welfare at bay. Read on, and learn how to keep your kids safer and injury-free.