The Mother of all Super Bowlers

Gretchen Rose is back on the blog with this a timely football mom view of the Super Bowl experience. 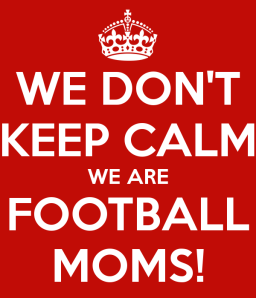 Super Bowl Week is upon us! The world collectively holds its breath in anticipation of the Big Game. Fifty years of Super Bowls is an accomplishment.  The festivities grow larger each year. The build up of the parties, the press, the half -time shows and of course, who will actually play the game make for fabulous reality TV. The epic match up of the venerable Peyton Manning versus the young-gun Cam Newton will certainly entertain all of us for an entire week of anticipation.  This Sunday, I find myself more concerned with Peyton’s mother – Olivia Manning, my ultimate football mom Hall of Famer and role model icon.  How will she handle this week?

END_OF_DOCUMENT_TOKEN_TO_BE_REPLACED

Readers, please welcome Gretchen Rose to the Trophy Mom blog. She’s a football mom and will be sharing some of her experiences from time to time. Here’s her first post, just in time for the National Championship game. Give her a big Trophy Mom welcome.

Two steps forward – one step back.

I know that you have seen the car commercials starring Matthew McConaughey. You know the ones – where McConaughey drives around and has a philosophical conversation with us over random topics? The hypnotizing Texas Drawl (God Bless Texas) draws you in to listen to his transcendental talk. Yep, I thought it was Mumbo-Jumbo, too, until I realized he was actually talking to ME!

“Sometimes you have to go back, to actually go forward.”
I actually understood these prophetic words somewhere between Football Bowl Game 15 and 18 during the Holiday Break. (We watched almost all 32 of them by the way). McConaughey made me realize the complexities of my fall season as a Football Mom.  I just thought I was cheering and volunteering for the teams and sport that I love. Maybe it turns out there was more to the project than I knew! END_OF_DOCUMENT_TOKEN_TO_BE_REPLACED

I’m hanging out at the NFL offices today with a host of youth sports representatives, including USA Football, Hockey, Basketball, Cheer, Gymnastics, Little League Baseball, US Lacrosse and Soccer, plus a host of bloggers and parents.
We will be talking about ways to make sports safer for all participants. I’m very happy to be included and am looking forward to a very informative and productive discussion. 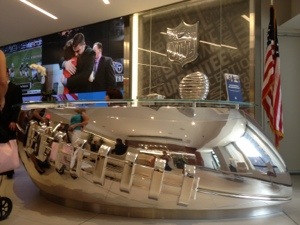 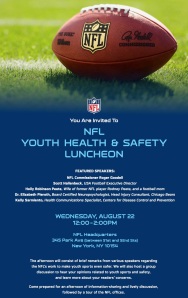