Step away from the ledge: a survival guide for sports parents

We are in the doldrums of winter and your youth sports team forecast is dreary with a chance of losing it. The long season is wearing on you. Your player has managed to lose one uniform sock and has worn a hole in his $45 warmup pants. That super spirited mom with the team cheers and cowbell is causing your eye to twitch. The motivational speeches from the assistant coach 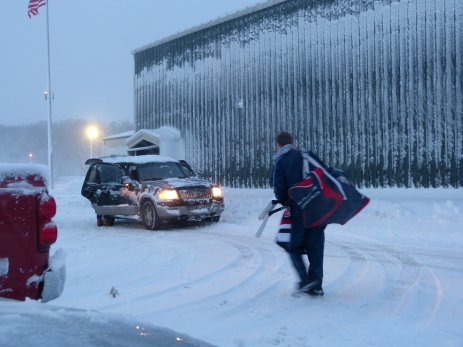 are wearing thin, and if you get one more team email about snack schedules, you might blow.

The bloom is off the rose, people, and it’s easy to start focusing on the negative. Maybe your team won-loss record isn’t what you thought it would be, or your kid isn’t in the starting lineup every game. We’ve still got a long way to go, so let’s take a step back from the ledge and get some perspective.

Is your kid still having fun?
Maybe your player’s enthusiasm has waned slightly, but it’s hard to maintain a high level of energy for an entire season, unless you are Jim Harbaugh. But in general, does your player enjoy going to the games and practices? Does she like hanging out with teammates? Does he have a love for the sport? Are you seeing sweaty heads and smiles? The answer should be yes. If it’s not, then let’s ask some questions. Is a lack of playing time getting him down? Is there bullying in the dressing room? A losing season or overbearing coach? Talk your way through it and see what can be done. It’s all figureoutable.

Is your player getting better? Is the team getting better?
Look at individual development and overall team development. I remember watching our first hockey practice after the draft. Two kids were zipping around like NHLers, two kids could barely stand up, the rest were clustered in the middle. But halfway through the season, the two new skaters were hard to pick out, the NHLers didn’t stand out as much and the whole team had improved and was starting to play something closely resembling hockey. That’s success in my book.

I consulted Phil Simeon, owner and master instructor of NF Hockey skills development camps in Ontario, Canada on this one, and he agrees. “You could be tempted to measure your child’s development through goals, assists, playing time, and how the team is doing in the wins/losses column,” Phil says.”No matter how the team is doing think about the type of improvement that has likely occurred with your child from September to January. Take a step back and think about those first few practices and then look more closely at an upcoming practice – what skills have improved.”

Phil goes on to say, “It’s likely that your child has improved his skating, shooting, stickhandling, or some combination of those skills. Perhaps your child’s positional play or decision making has improved in game play.”

If you are not seeing some improvement, look a little harder. Phil says it’s easier to identify what your child needs to improve on – you may have even spent time during the season talking about this with your child. Take the time to let your kid know where he has really improved. Kids get pumped up when you acknowledge some specific skills they have improved on.

See? Things are going just fine. Your kid is having fun and getting better. There’s still half the season left so let’s make the most of it. It’s time to get our attitude adjusted.  What’s all this lying around? We can do this!

Check your attitude
If you are moaning and complaining about the coach, the season, the parents and the snack schedule, your player will pick up on it and exhibit the same behaviors. You might need to readjust your expectations from the start of the season and work on making the most out of the remainder. Get your kid to practice on time so she can develop and hone skills. Talk to your player about having a good attitude and the importance of teamwork. Look for positives and then pass out a bucket of compliments.

Offer to help
Everyone starts the season with the best of intentions, then life happens. Those carefully planned practices disintegrate because half the kids don’t show up. The goalie gets hurt and another player has to step in. Maybe coach got a new job and doesn’t have as much time to devote to the team. Step in and see what you can do to help. Start a car pool to help get everyone to practice. Help with water bottles or game equipment to take the burden off coach. Plan a team get-together for some fun bonding time. Getting involved will help the team and make you feel more connected.

Add some fun
Sometimes you and the kids just need a break from the practice-practice-game-practice routine. For some fun ways to battle the malaise, check out this post.

Stay positive
Hey, you’ve made it this far–the next half will be a piece of cake. After our little pep talk here, you’ve got a fresh view on things and you’re ready to finish strong. Besides, there are just a few more weeks until the next sports season starts and you’ll be losing your mind over a different activity.

How do you make it through an entire sports season without losing your mind? Any tips for those days when you feel like mailing it in? Share in the comments.