← The good, the bad and the stupid: A weekend of youth hockey
Singing the praises of TeamSnap →

Here’s a treat for my readers– a guest post by Ed Arnold, former editor of The Peterborough Examiner, and my personal hockey coach/author hero. One of my more popular posts was the Recommended Reading List for the Thinking Sports Parent, and the first book I mention is Ed’s title, Whose Puck Is It, Anyway?  He’s finishing up a book on his time spent with the Peterborough Petes, an OHL hockey team, that should be out in later this year. Ed and I got hooked up through the magic of the interwebs and he agreed to write a post for the Trophy Mom. I hope you share it with your coaching friends. 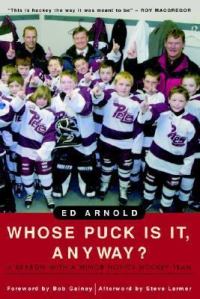 Children’s hockey is a strange relationship. We think and talk like we just want to make sure the game is fun for the kids, but then act in different ways.

We all would like to make it fun for the children but then put so many obstacles in their way.

How strange is it to go to a child’s hockey game and see a team of 10 players taking shifts. Six kids on the ice facing another six, while the others sit on benches waiting for the coaches to change lines or the buzzer to sound.

Gawd, some of them can hardly skate, wouldn’t it be better to throw them all on the ice so all of them would get that 50-60 minutes of ice time?  Hockey legend Bobby Orr in his new book says he learned to play on the ponds and thinks if he were growing up today the coach probably wouldn’t play him because the coach of his teams allowed him to wander with the puck, used his imagination and was allowed to make mistakes. Why don’t we allow children to do this now? If the kids aren’t playing on ponds any longer why not include some practices where the kids are set free to play pond hockey for an hour?

Another strange obstacle for kids is when penalties are called. The team suffers if the kid goes to the box for two minutes. The coach suffers because he had to make decisions on which kid is going to sit because another one had a penalty. The kids suffer because they lose ice time, a valuable commodity when you are trying to learn or teach the game. Wouldn’t it be better if the child goes to the penalty box for a half-minute or so just to teach them the rules and the teams continued to play at even strength? None of the kids would lose ice time. We are talking four to six year olds here, but even older ones would benefit.

In all-star hockey the coaches select which players will make the team and yet start benching the very kids they selected. If the kid isn’t good enough for all star, don’t put him on the team if he isn’t going to play. If he is good enough, then play the child. And if he is not improving, why isn’t the coach spending more time, not less on that child?

Equal ice time is not always possible in this fast paced game, but fair ice time always is.

The problem is that leagues don’t adopt these rules so if one team choose fair play and the other team doesn’t, the ice slopes in favour of the team that is playing its superior players more often. If they all had to use fair ice time, wouldn’t that be more fun for the kids?

The real fun is playing the game, not sitting on a bench and certainly not be yelled at or punished for making mistakes. The kids have enough rules at home and in school, give them an hour at practice and games to have fun. The fun is sliding down the hill, sitting in the roller coaster, swimming in the pool; it is not in watching others having all the fun.

Ed Arnold is a writer and former childrens’ hockey coach in Peterborough, Ontario who wrote the book Whose Puck Is It Anyway? A season where he and fellow coaches former NHL stars Steve Larmer and Greg Millen nor parents were not allowed to yell and children were encouraged to use their creativity, imagination while being allowed to make mistakes.

One Comment on “Ed Arnold’s “make it fun, make it fair” approach for youth hockey”