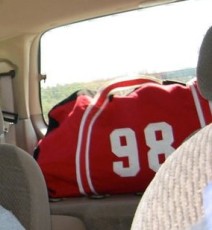 I know how much athletic equipment stinks. With a collection of hockey, softball/baseball or soccer bags in the car I have driven home with the windows down, lest I pass out behind the wheel from noxious fumes. Mike Morneault has four kids and every bit as much stink so he set to work and came up with the Odor Gladiator™, a patented athlete-customized high-performance deodorizer that battles stench right there in the equipment bag. Mike and I have bonded over kids, sports and stink and he took pity on me, and my unfortunate nose, and sent us an Odor Gladiator™ to test out. Never ones to shrink from a challenge, we tried it out on the stinkiest kid in the house, the 17-year old boy, and put it to the test in his hockey bag. Keep reading to see what we thought, and find out how you can win an Odor Gladiator™.

About Odor Gladiator™
Right off the bat, you can see the Odor Gladiator™ is unique. There’s an atmosphere of fun around this company and I am very much in favor of fun. The Odor Gladiator ™ has a very cool, playful design resembling a Sparty helmet, and you can pick out your own color combination. We picked a blue and red combination to coordinate with the hockey jerseys. 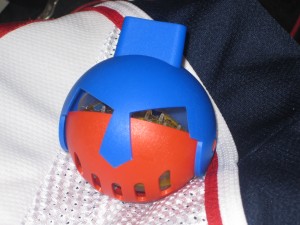 The Odor Gladiator™ is extremely durable, made out of a specially created polypropylene that houses a disc of pure sweet-smelling goodness containing Odor Neutralizer™.  The disc, or Fresh Linen Shield, as Mike calls it, is what takes the stink out. Well, it actually functions by complexing specific organic molecules and reducing their concentration in the vapor phase. Got that? As I understand it, and I never took chemistry so I could be wrong, it changes the stink so your nose doesn’t smell it anymore.

Our impression
I can tell you that it definitely made an immediate impact. Our entire hockey locker room smelled better with the addition of just one Odor Gladiator™ in my son’s bag. After well over a month of testing, my son reports “I’ve got the best smelling bag of our whole team. By far.” Mike says the disc will last 45 days at least and we have found that to be true. Our disc is still going strong.

One of the things that I like about this product is that it’s a toss-and-forget thing. You literally just insert the disc, snap it closed and toss it in the bag. No spraying, shaking powders, nothing.

Another thing I like is that Odor Gladiator™ uses organic, non-toxic fragrance oils. There’s nothing gross or harmful, it won’t leak, doesn’t leave any dust or residue so I’m not worried about damaging expensive hockey equipment.

Also, Odor Gladiator™ is made in the USA and purely entrepreneurial. I love supporting those kinds of companies. The Odor Gladiator™ costs $14.95 and includes a disc to get you started. A three-pack of Fresh Linen shields is $17.85. In my experience, that would be more than adequate to get you through the season and well worth the price.

Other uses
In addition to the equipment bags, I think you could find some other uses for the Odor Gladiator™. If you want to freshen up a room, stash an Odor Gladiator™ under the bed, or get one to match the décor of the room and put it on a shelf. Instead of one of those pine tree air fresheners, put an Odor Gladiator™ in the car. Keep one in the laundry room.

Uh-oh
Despite the durability of the Order Gladiator™, my son did manage to shear off one of the helmet posts. He has no idea how. I have no idea how. I didn’t think it was even possible! But as I explained to Mike, if something can be broken, we will do it. We have split bike helmets in two and cracked shin pads. The new eyeglasses were broken within 24 hours. My son broke his arm, then broke the cast. Twice!  Now, our Odor Gladiator™ still worked fine but I let Mike know what happened. Sometimes you learn the most about a company when something goes wrong and what I learned here is that Mike Morneault will stop at nothing to make sure customers are satisfied. He immediately activated his customer service response team and we had a new Gladiator right away.

Overall rating
I’m giving the Odor Gladiator™ a highly recommended rating for odor fighting, style and concept. It’s a great product and solves a big stinky problem. You don’t have to take my word for it. Daily Grommet has a piece on it, too.